When the owner of Turquoise bought the 2011 yacht in December last year, the interior was, as Jonny Horsfield of H2 Yacht Design puts it, “In good nick, it was just extremely plain. It had chartered, but the comments had always been that the interior was a bit ordinary.” Indeed Turquoise had the bones of a great charter yacht.

The decision, then, was what to paint on this blank canvas. “My wife and I knew what we wanted from the off,” says the owner. “Seven star service with a warm and luxurious interior that would work for families as well. Timeless elegance so that the yacht would not date overnight.”

The refit plan followed this overarching concept. Substantially it involved a new interior design that improved the use of rooms and decks, as well as creating a more comfortable and glamorous atmosphere.

British studio H2 Yacht Design was brought in to re-imagine the onboard lifestyle, while MVS Interiors installed the new interior and the project was carried out at Amico. The basic structure of onboard spaces was kept, but the treatment changed significantly.

In the main saloon, for example, a storage unit by the aft doors grew into an art deco-influenced bar, while further forward the arrangement was rethought. “The way the furniture was laid out there, it split the room in the middle,” says Jonny Horsfield. “They had two big rectangular coffee tables and you walked right through the middle of them. There was no intimacy there. The beam was wide enough that we could do quite a complicated arrangement of coffee tables and

footstools, making more of a decorative feature in the centre of the room. It creates a visual treat.”

The dining saloon, featuring an extendable 12 to 14-seat table, which has been designated a chic and formal space –a natural decision. Now better, informal, alfresco dining areas are available on deck. “It’s a modern interpretation of art deco,” says Horsfield. “We wanted to introduce a lot more contrast, so you have dark macassar wood in highgloss varnish – really rich and sexy – and stainless steel, which highlights it. There are beiges, whites and greys and only little bits of colour here and there, for example in the main saloon with that petrol blue.”

In the master cabin, was a full-height headboard that sectioned off a small dark dressing area behind the bed. H2 cut a large hole in it to give a feeling of light and depth in the cabin, while the dressing space itself gained even more light through backlit onyx and mirrors.

The forward bathroom was untouched, but a small entrance lobby to the cabin has been turned, more usefully, into a chic little study.

Upstairs, the upper saloon is rejigged with a large L-shaped sofa and a much bigger TV, giving the space a friendlier, more relaxed feeling than the previous somewhat colder design. The exterior decks have also been reconfigured. The sundeck, which was laid out for sunbathing alone with a large spa pool and sunpads, now also features a stylish bar, barbecue and dining area.

The main aft deck downstairs has been pepped up too. “It was a dead space,” says Horsfield. “It’s still a seating area in the day, but can now be turned into a Nikki Beach-style cinema area. You move the loose furniture around and a big screen in front of the doors comes down. We’ve got sheer curtains you can pull across the sides so it’s a bit more private and intimate.” 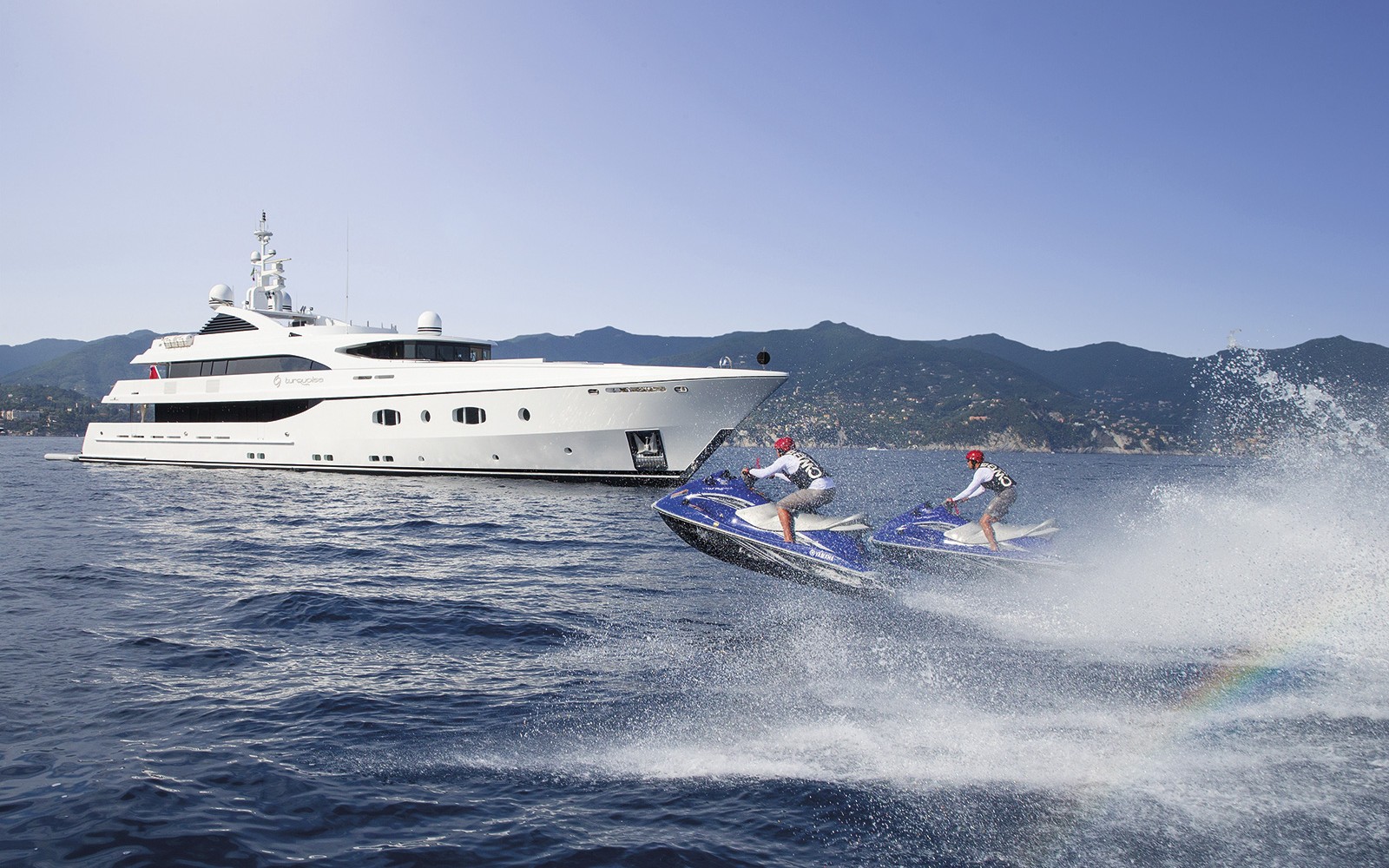 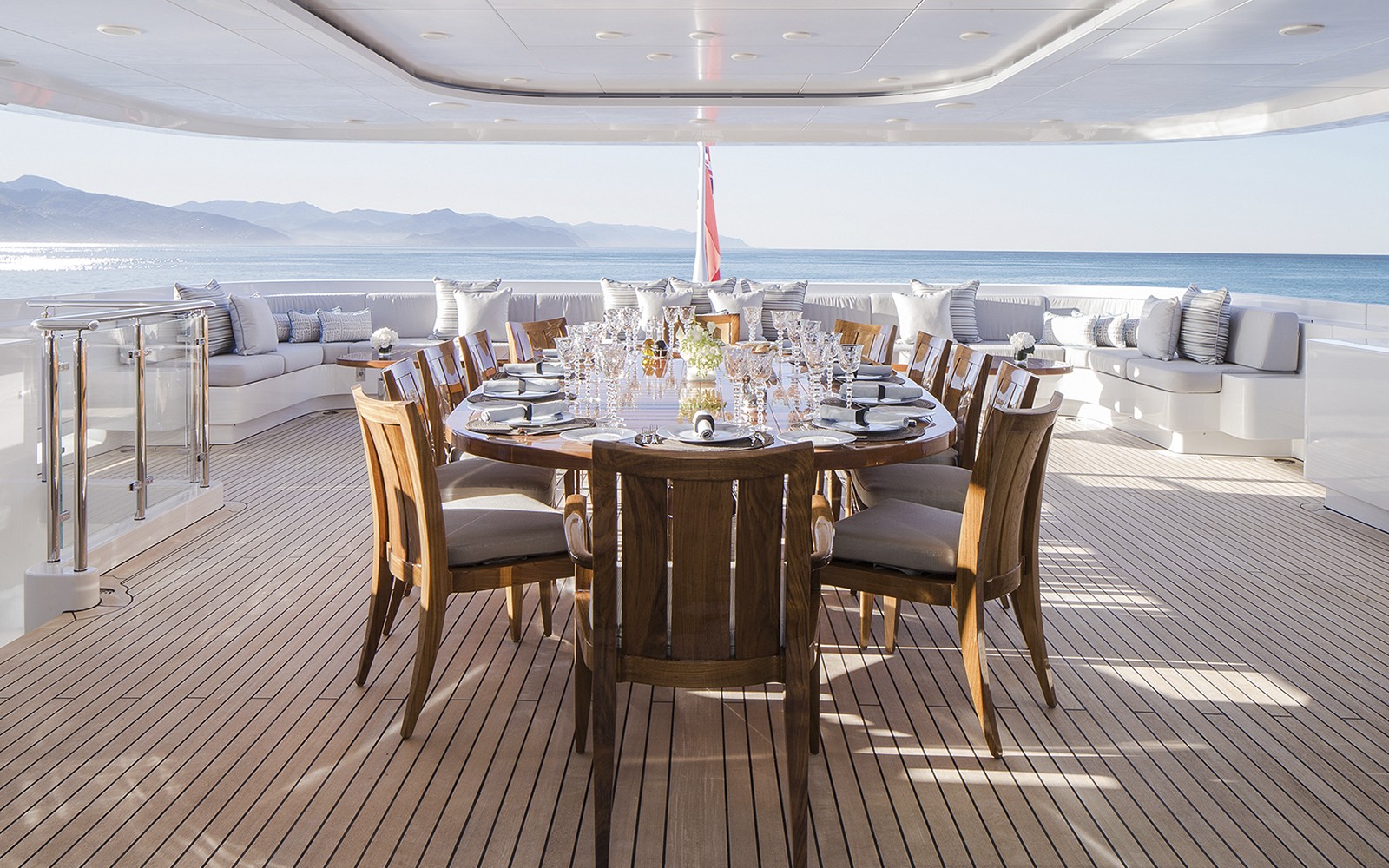 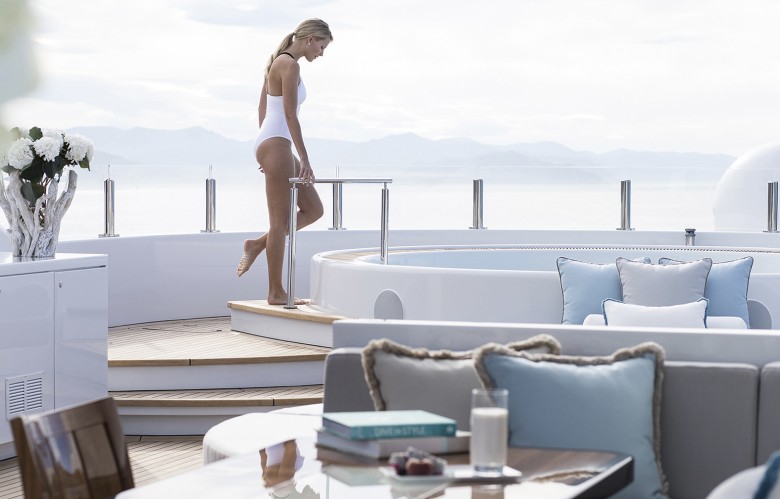 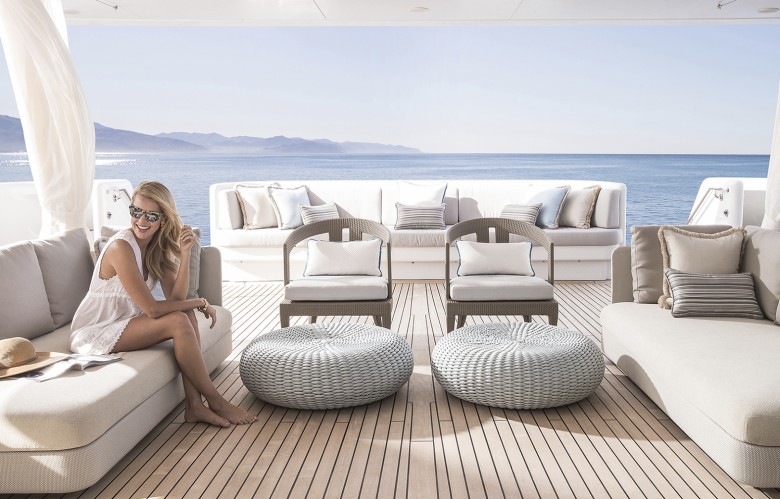 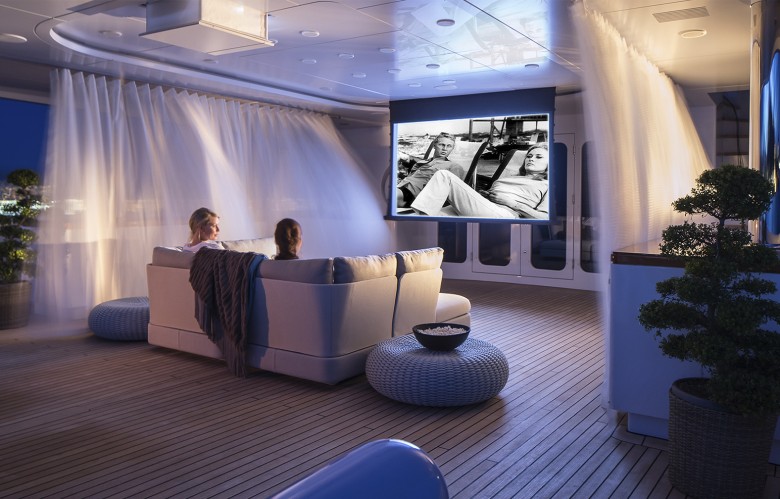 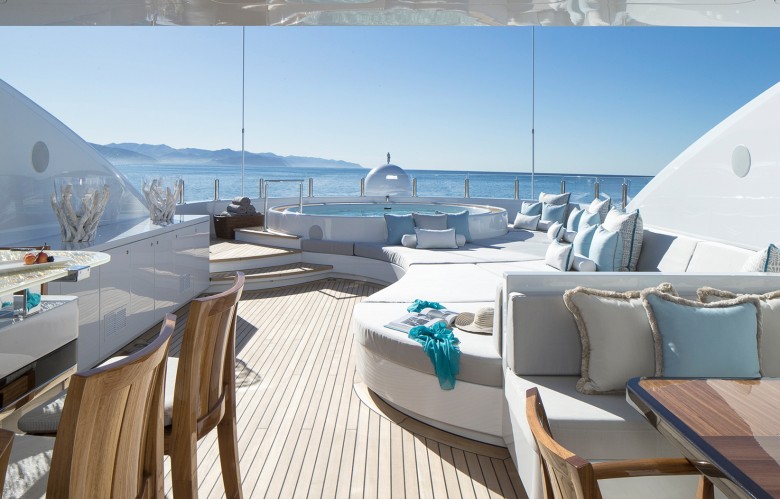 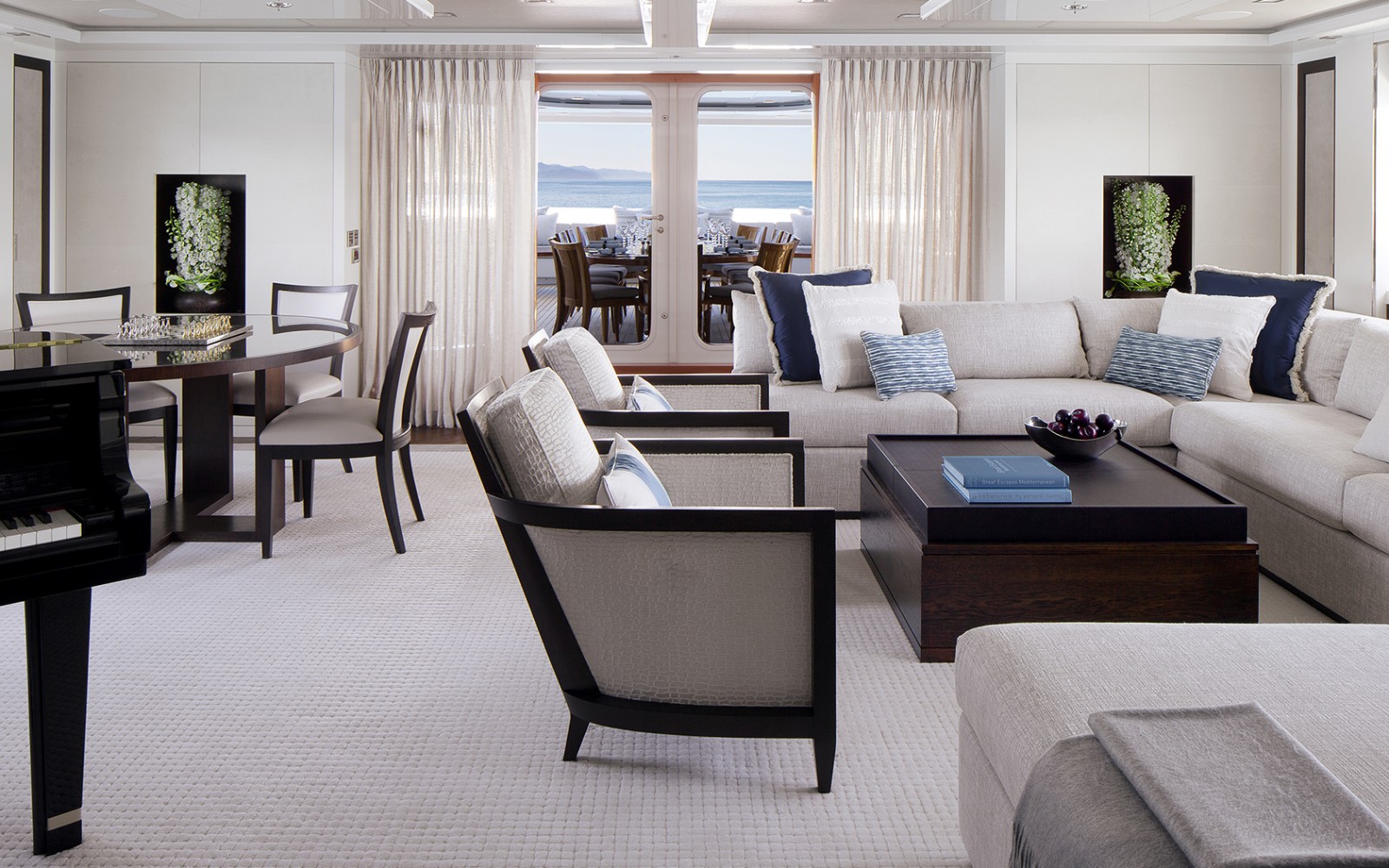 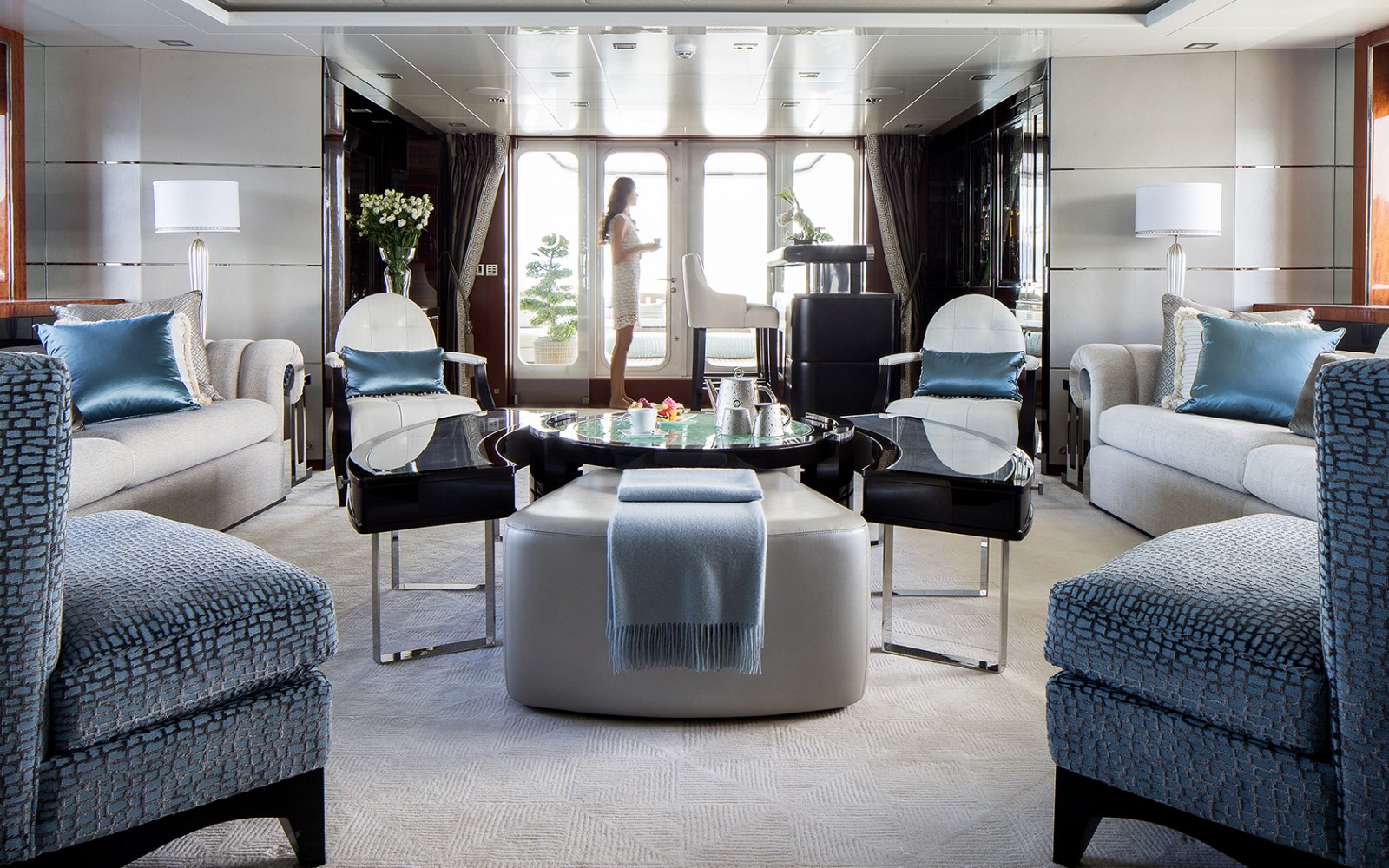 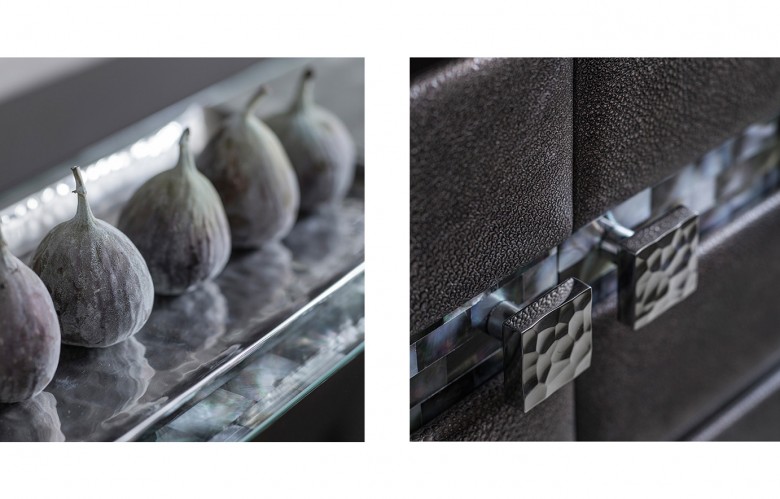 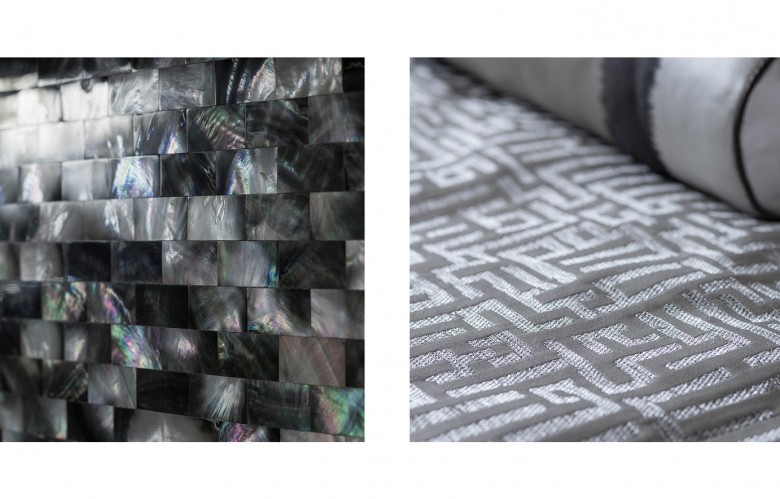 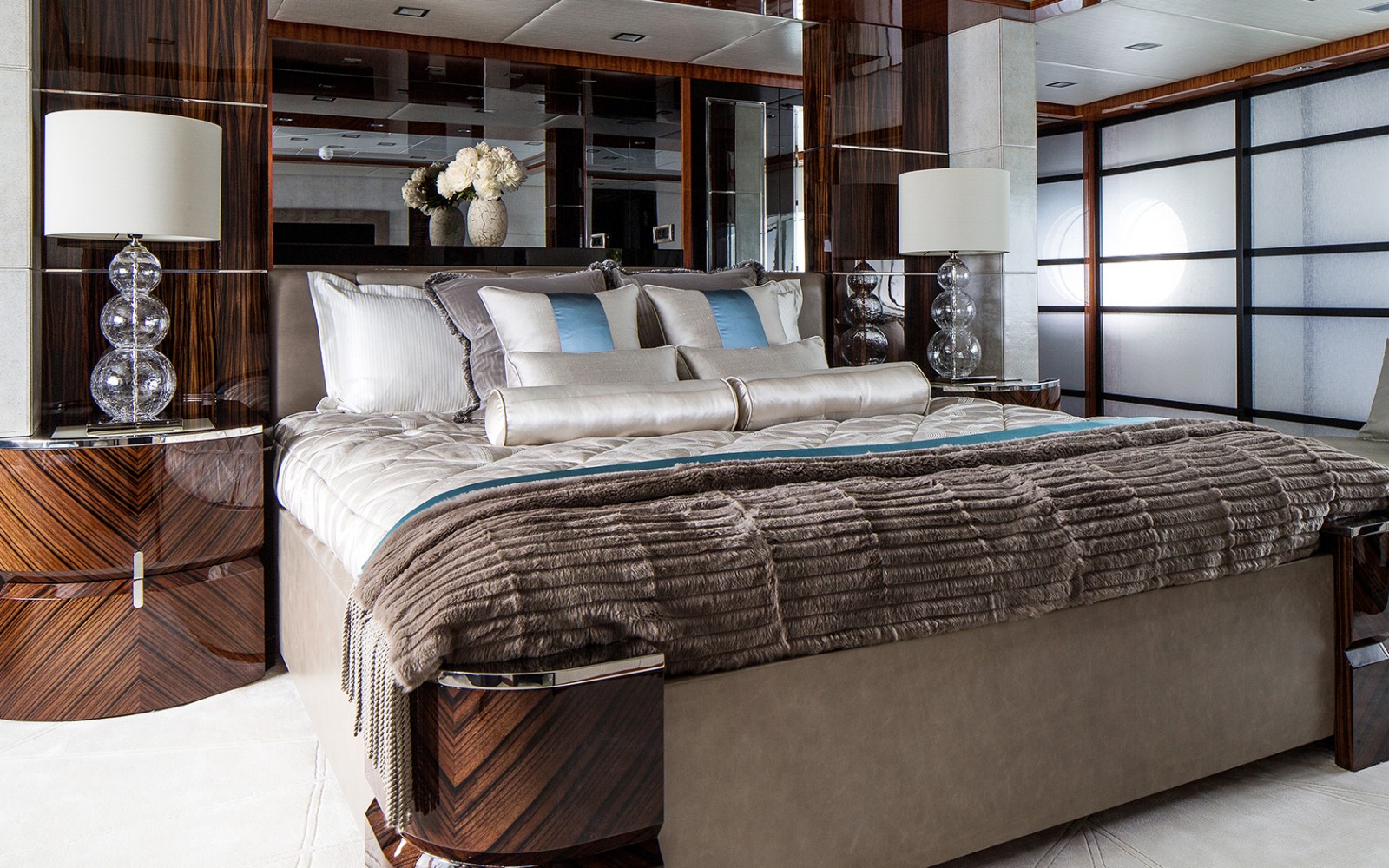 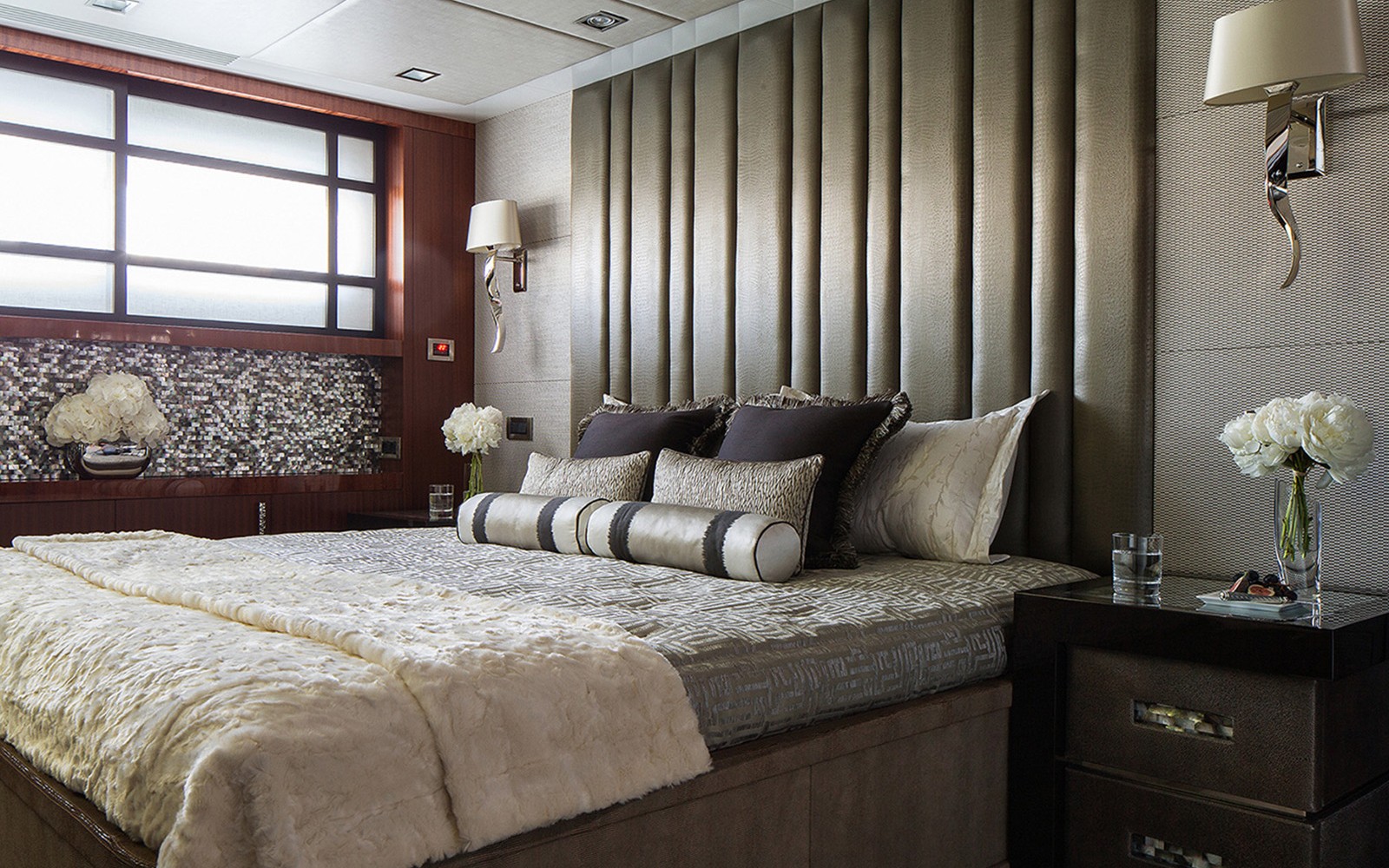 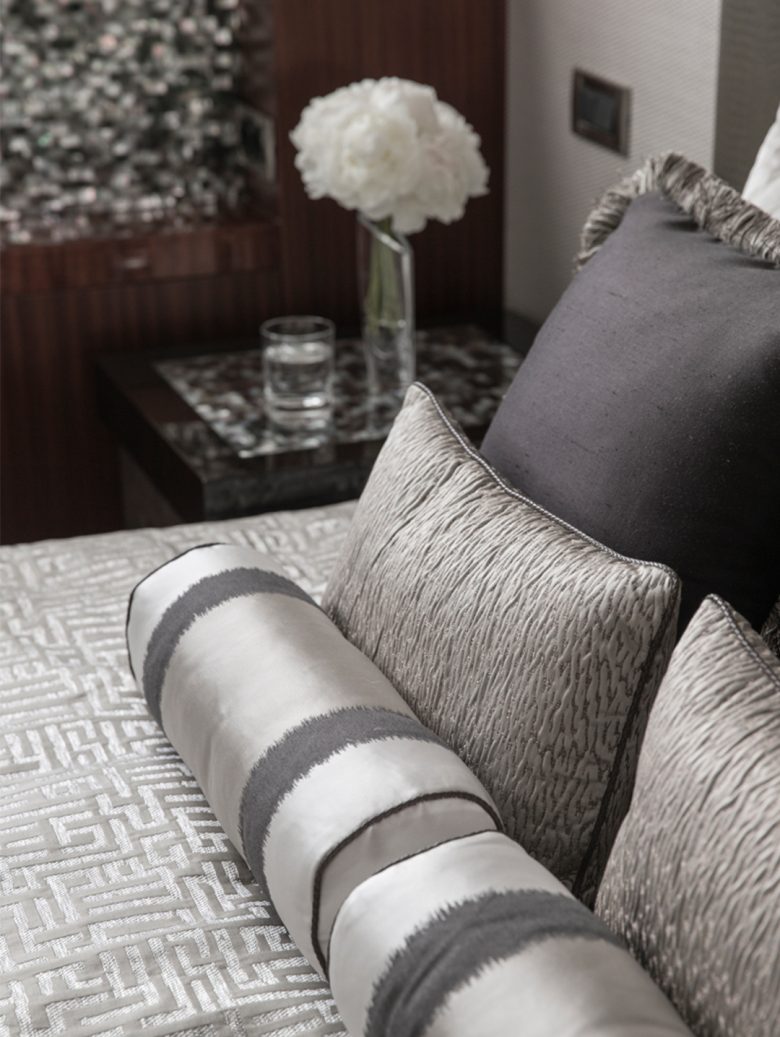 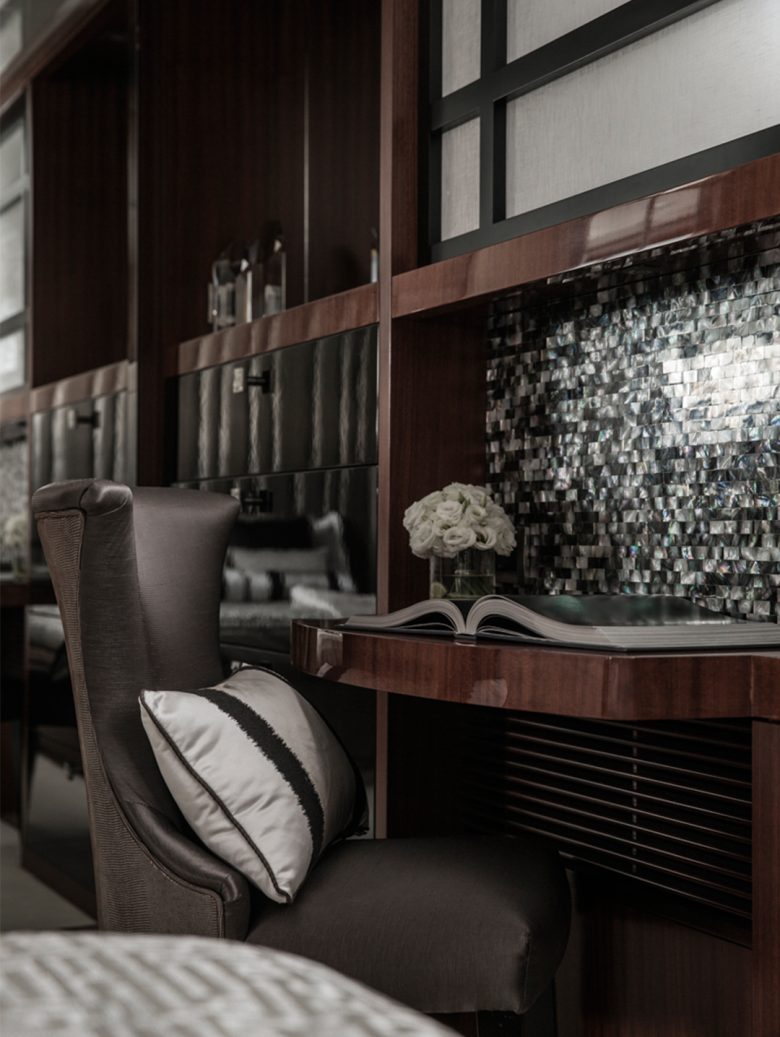 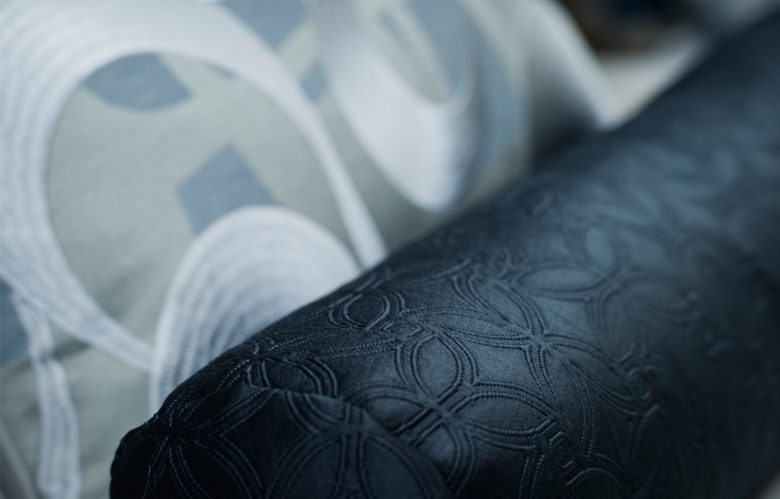 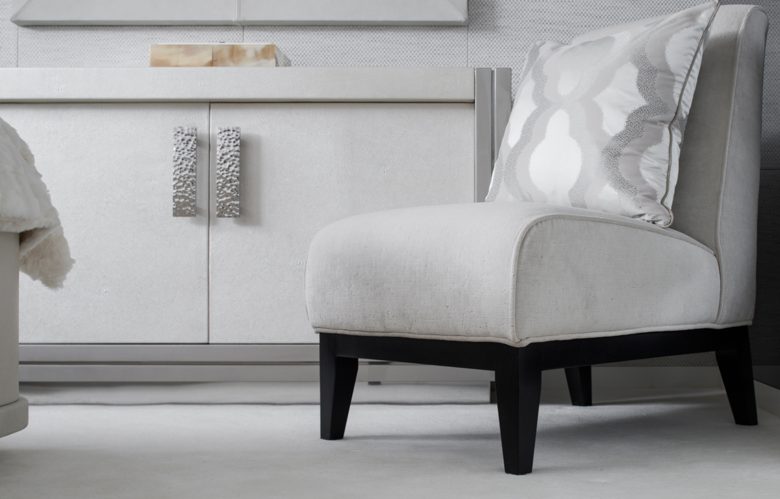 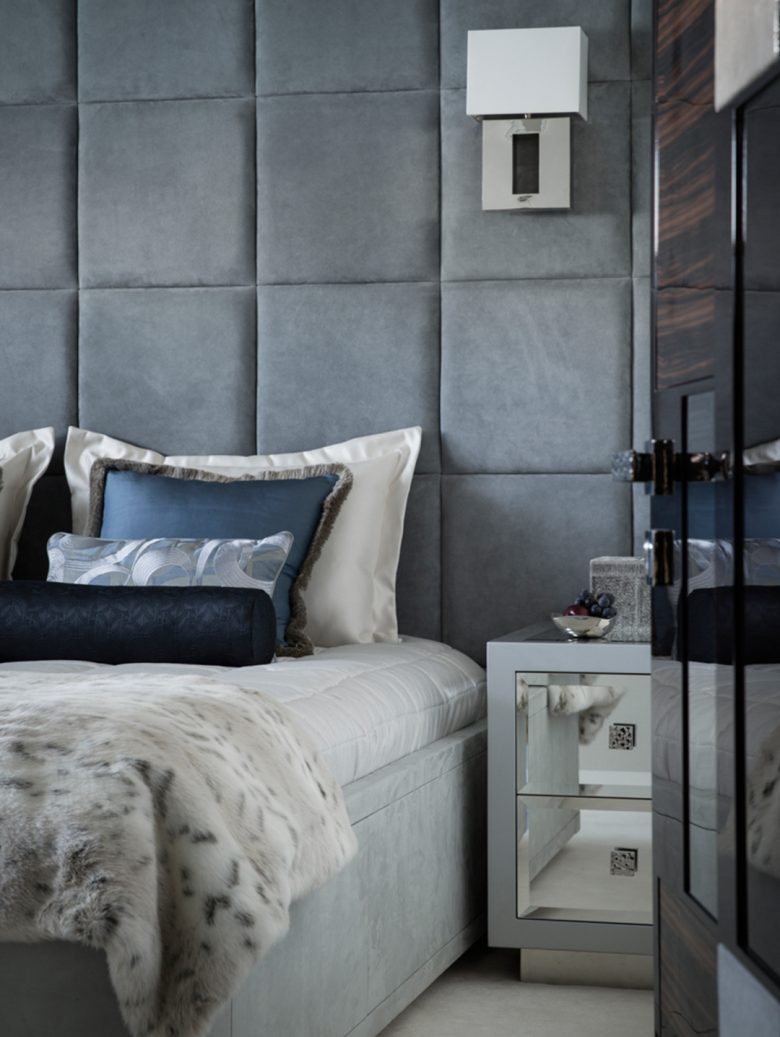 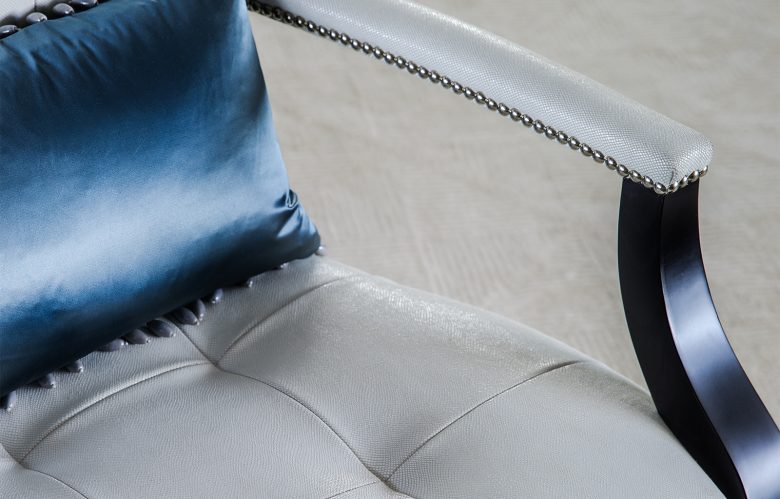 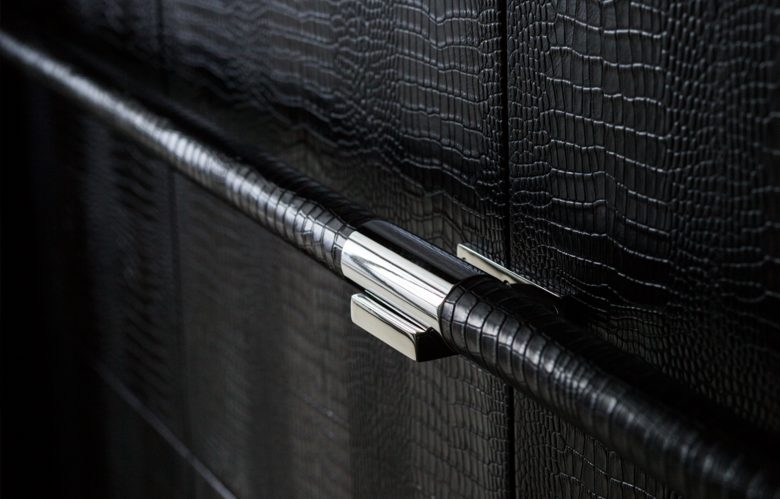 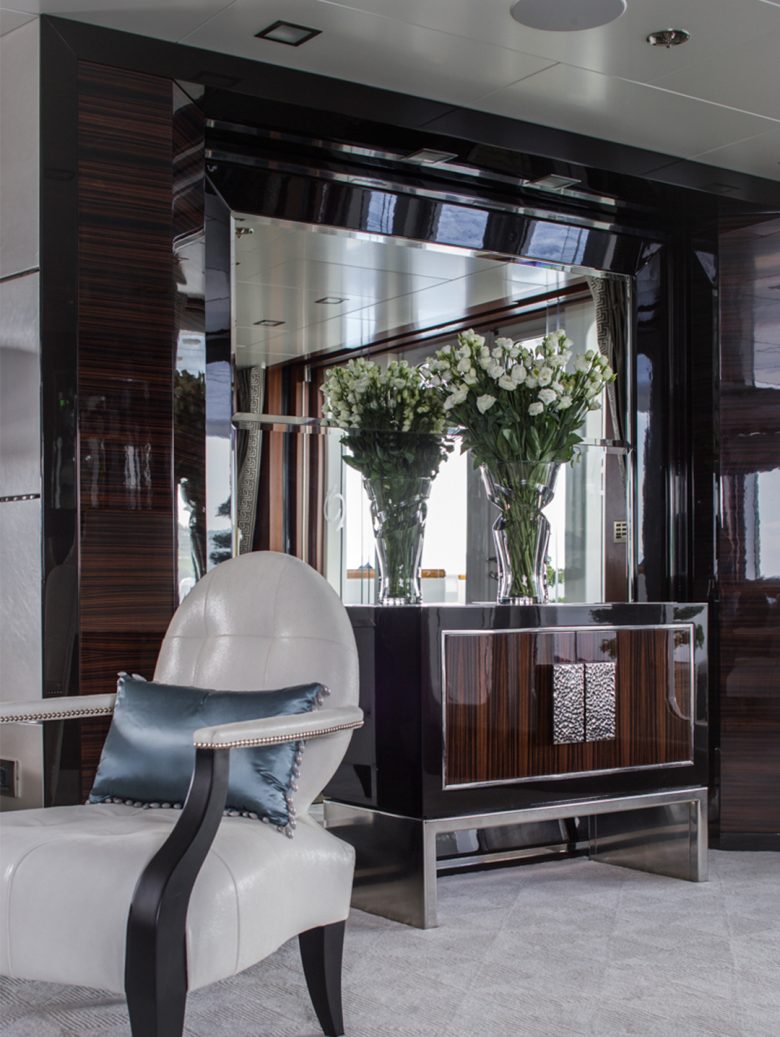